Out of the Comfort Zone: excerpt from ACTS OF THE SAINTS 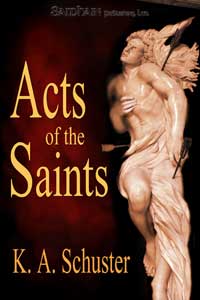 I've been promising to post this, so here it is. Acts of the Saints was released September 12, 2006 by Samhain Publishing. Before proceeding, however, you MUST read the introductory blurb posted at the publisher's site: http://www.samhainpublishing.com/actsofthesaints.shtml. If you don't, you won't have much of a clue what this excerpt is about.

Catherine, housewife-turned-resister, is ultimately the true hero in this work of speculative fiction set in a Brave New World quite different from Huxley's. The following excerpt takes place after her and Theodore’s car breaks down in Iowa. They’re put up for the night by a young couple who, although Heeders, are sweetly naive and quite charitable. Jenny, one of these good Samaritans, takes Catherine to a chapter meeting of CWEEN, the Christian Wives’ Excellence-through-Enlightenment Network. The attendees are discussing the fate of a fellow member--a married woman who’s suspected of getting too close to a man other than her husband (even though her husband is, from what Catherine can infer, "an ignorant and abusive shit").

What Catherine sees and hears at this gathering ultimately, and literally, makes her ill.

Ramona opened her Bible. "I've asked you all," she said, "to pray for Sister Muriel Raney while she's on retreat, so she might find deliverance. And to pray for our guidance, should she not let herself be delivered and we must then decide what to do."

Jenny raised her hand and was recognized. "I think it would be polite," she said, "to fill Cathy in."

Catherine wanted to curl against the wall but the group's attention forced her to sit forward. "Don't feel you have to. It's none of my business."

Most of the women, beneath their madonna smiles, seemed to agree, but they could hardly ignore an appeal to their courtesy. Ramona glanced around the room to read their faces. Finally she sighed, folding her hands on the open Bible. She looked at Catherine with opaque, no-nonsense brown eyes.

"Sister Raney is plagued by a checkered past. She accepted, or claims she accepted, Jesus Christ as her personal savior nearly a year ago. She joined CWEEN shortly afterward. But it didn't take us long to notice aspects of her thinking that clashed with these inspired words"--Ramona held up the Bible--"and the modern application given them by our Church."

"She reads hell-spawned trash, for one thing," Denice said.

"She’s a teacher," Jenny piped in.

"No matter," Ramona said. "She tried to justify her interest in that garbage by claiming a divine sanction of human curiosity. But we as one-hundred-percent pure Christians know better."

"The Devil is a cunning deceiver," Belle offered.

There were murmured amens.

"And then she began to denigrate her husband," Ramona went on. "Which is a snubbing of God's word--"

"Tom has his burdens," Denice said, nodding and swaying.

Ramona snapped her a brief, censorious look. "Sister Raney has a hard time realizing that femininity's strength lies in submission and service . . . to God, to country, to family."

"Tell her about the dark-haired man," Lori Schmidt whispered.

For more reasons than she could immediately grasp, Catherine looked at CWEEN’s newest and youngest member. Lori's eyes, too, were wide . . . with fascination.

Catherine wanted to take her away. The girl had some imagination left, and Catherine wanted to protect it from further invasion by blank, sanctimonious nay-sayers. Suddenly, and more strongly than since Philip's disappearance, she felt like a mother again.

She wanted to reverse the trend set by this pallid coven and school Lori in whatever carnival of mysteries the girl had been banned from exploring. She wanted to tell her about the dark-haired men in every woman's life, and the books and music and private dances that kept the memory of these men unfading. She wanted to warn her about a god and country and family that demanded all the wrong things of a woman, or only small parts of the right things, and warn her about the curlicues of femininity that, left unchecked, tatted themselves into inescapable seines, their beauty as false as that of any symmetry in any engine of destruction.

Catherine thought about Philip and wished he'd been a girl. Then, guiltily, she recanted, and wished instead she'd had him without the dubious benefit of marriage to Gene. And she wished fiercely that she'd met Marty before she married Gene.

What the hell was she doing here, with these people?

Labels: Acts of the Saints, excerpts, my books

I know I have a comfort zone when it comes to movies. This seems understandable, since movie-making is primarily a visual art. Today’s cinematic techniques can lead to an unnerving degree of realism. I don’t want to see certain acts like rape or torture vividly depicted. No way, no how. That "sadistic dentist" sequence in Marathon Man is definitely not something I want to sit through again. Anything worse than that--forget it. And today’s movies have gotten far, far worse than that.

Fiction, however, is obviously a verbal art. Images are suggested, not unignorably and inalterably presented, and their impact depends on the vigor of the reader’s imagination, which must weave together and then lend sensory substance to the word markers. I have a very vigorous imagination, so I suppose I’d also squirm if horrific acts committed by human beings in a realistic setting were described in grisly detail--one of the many reasons, I suppose, I’ve become disenchanted with Stephen King. But beyond such acts so described (and just-plain-bad writing, which makes me squirm from follicle to foot), I can’t imagine what else would fall beyond my reading comfort zone. Hell, I figure if I suffered through James Joyce, I can suffer through just about anything.

It seems other readers find many things too offensive for their imaginations to tackle.

I’ve found this to be the case with books that cover issues relating to sexuality, politics, and religion--"hot-button" issues--particularly if the book’s point of view falls outside the Milquetoast mainstream. I don’t quite understand this. Again, controversial material doesn’t bother me, no matter how extreme the stance, unless truly revolting, harmful acts are described (with a perverted degree of relish) in truly revolting and largely unnecessary detail. It seems crazily hypocritical, for example, to rant against a novel that depicts flag-burning and yet allow one’s children to watch movies and tv shows and play video games in which senseless violence is central. HUH? Better to stimulate critical thought and discussion than cultivate a bloodthirsty and/or jaded nature.

That's right. Dell. The computer giant. I've had it with that stinkin' outfit. The gloves are coming off.

Here are my experiences to date. When I first called them to order my system, which was early in 2004, I had to hang up and call again. Why? Because I couldn't understand a fucking word their "customer service" respresentative was saying, that's why. Then my printer turned out to be a lemon and had to be returned. Then I got a grossly overpriced color cartridge that was defective. Then, as I was scurrying to get contracts printed, the grossly overpriced black cartridge took a crap, even though it was still 23% full of fucking ink. Then, when I called to order new grossly overpriced and probably defective cartridges, I couldn't understand a fucking word their "customer service" representative was saying. Then I found out the cheesy WordPerfect program that came pre-installed on the computer is incompatible with the MS Word programs most of my editors use, resulting in endless hassles and delays!

God, how I wish somebody has slapped me before I got involved with that WE ONLY HIRE PEOPLE WHO SPEAK SHATTERED ENGLISH AND ONLY SELL MADE-IN-CHINA CRAP company!!!!! I think it's time for a boycott, seriously.
Posted by K. Z. Snow at 11:58 AM 2 comments: