I've pondered this subject on and off and still haven't lit on an attitude I'm comfortable with. (Yeah, okay, so I dangled a preposition.) I've been an editor at two different houses: first, the august Llewellyn Publications, known for serious nonfiction works on every aspect of occult studies, e.g., astrology, witchcraft, high magick, divination, the afterlife, psychic powers, etc.; second, a micropublisher that specializes in regional, local, and family histories. Whenever I wrote anything during my tenure at either company, it had to do with my my job.

Since I started publishing my own fiction several years ago, I've noticed that many e-pub owners and editors are also writers. I can't speak about larger print houses, because I have no experience with them, but a lot of peeps in e-publishing seem to like working both sides of the desk.

Is this good or bad? Is it neither good nor bad? Can it be both?

This situation does have distinct pros and cons. There've been some notorious instances in e-publishing of owners allegedly writing under multiple pseudonyms and giving themselves preferential treatment. Teddypig, a reader and reviewer, recently posted on this topic at his blog. Other companies have been accused of the same shenanigans. I suspect it's damned tempting to further one's own writing career in this manner ("Hey, I'm the owner of this sandbox!"), but it certainly isn't ethical.

On the other hand, many owner-writers like Tina Engler (aka Jaid Black) at Ellora's Cave, Margaret Riley (aka Shelby Morgen) at Changeling Press, and Treva Harte at Loose Id have done little or no spotlight-grabbing beyond what's necessary for promotion -- and I mean the promotion of any title. In their stadiums, or sandboxes, the playing field is level. Margaret Riley has said that her experiences as an author have helped her be a more responsible, and responsive, e-pub owner, and I don't doubt her one bit. She's a marvelous lady.

The issue of editors who are also published or aspiring authors is a bit thornier. On the plus side, a writer understands other writers . . . or should. We all have similar aspirations, fears, concerns. There is, I believe, such a thing as a creative mindset. So far, so good. We're cut from the same cloth. We're simpatico.

What happens if a writer-editor starts imposing, however inadvertently, her authorial voice and/or viewpoint on the work of her "editees"? It's always a possibility.

Then there's the matter of prioritizing. I know how rabid I am about writing. When I'm on a roll, I often won't bother answering the phone; I resent cleaning and cooking; I don't venture outdoors or even watch television. Coffee, potty, and letting the dogs in and out are about all that can drag me away from the computer. This isn't a good place to be for editors, however. To excel at what they've been hired to do, they can't put their own projects first. Emails need promptly to be answered; paperwork, shuffled; manuscripts, evaluated or edited; batches of material transferred to scores of different people. Any delays or mistakes resulting from an editor devoting too much time to her latest and greatest brainchild are . . . well . . . inexcusable.

I've often considered getting back into editing. I have the credentials, and I sure as hell need the money. For the reasons mentioned above, I've invariably scrapped the idea. The impulse to fashion my own stories is too strong. I'd be guilt-ridden as hell if I started neglecting my obligations on either side of the desk . . . but one side, at least, would certainly suffer. 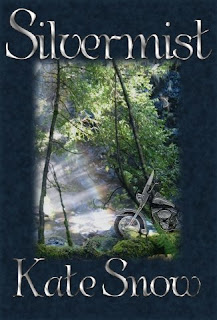 One of my books is no longer in the left column--an old-school, sweet romance that's always been near and dear to my heart and touched some readers, as well. Wha' happen?
Well, you see, I'd been selling Silvermist through an outfit called eBookLove. It was kind of like a microscopic version of All Romance eBooks, except the rights for all titles posted there had reverted to the authors (meaning there was no publisher behind them). I'd contracted directly with eBookLove to sell Silvermist. Since I'd received no statement in recent months, I hopped on over to the site . . . only to discover it no longer exists!
This is no big deal, really. Silvermist, as it stands, is too much of an anachronism for today's market, and the rights to it are still mine. But I was rather disappointed to realize that the site's owner, my first editor in e-publishing, never bothered to alert authors about eBookLove's demise. It's rather embarrassing to tell readers a book is available when it has, in fact, evaporated from cyberspace.
Anyway, I'm curious about what other writers do or have done with earlier works that aren't under contract. Ditch 'em? Rewrite them to bring them more in line with today's tastes? Cannibalize them and use characters, settings, and/or descriptive passages in other works?
Posted by K. Z. Snow at 9:42 AM 13 comments:

I'm enormously grateful for the reception Obsessed has gotten. Bitten by Books and Rainbow Reviews gave it high marks. Raine at Joyfully Reviewed really, really liked the sex scenes (I'll spare you the rave, although it tickled me). She concluded with, "Do not miss out on Obsessed. I loved it!" and went on to give it one of these big, pink, recommended-read rectangles.

I was particularly moved by the following words from a reviewer at Literary Nymphs:

Obsessed surprised me. I wasn’t entirely sure what to expect, but by the end, I realized how deep a story it is. Adin is an admirable man -- very loving toward his [girlfriend], but unable to shake the growing love for his best friend. Jackson possesses more than just physical strength, especially at the end, but it’s Celia who shines, even if she doesn’t take center stage. As someone who understands Adin’s plight, I couldn’t help but adore Celia for her loving, trusting acceptance of who he is and what he feels.

The love scenes are amazingly hot, but it’s the ending that got me. The very last scene has a beautiful, tear-inspiring, sweet moment. You’ll just have to read it.

So, thank you one and all. That goes for ordinary readers, too. The saga of Adin Swift and Jackson Spey is far from over. The steam has not yet dissipated (well, hell, considering they only see each other for a three-day weekend every couple of months, small wonder their hormones go into overdrive when they're together!) And their unique arrangement is not getting easier as time goes on. The groove is getting rougher, not smoother, the longer they proceed on its track. Jackson, still the emotionally guarded one, is having more difficulty than he'd like to admit . . . to Adin or himself.

Once I finish my current contractual obligations, I'll be getting back to the big novel in which these men next appear together. Hope I'll be able to find a publisher for it. The story is the most emotionally intense and psychologically tangled one to date, and with some dark humor, as well. Celia will also be checking in at some point. Not sure when, though, or how.