So, what's been tickling my funny bone during my insomniac rambles around the Interwebz?

Let's start with this photo spread on Queerty. You must click through all the shots to get the full effect. I confess, I was giggling like a little girl.

Then . . . on to Goodreads. One has a much better chance of finding hilarity there than on Amazon, where reviewers tend to take themselves seriously. For example, I stumbled upon a reader of m/f romance who likes to take issue with the output of super-popular authors who don't always exhibit the best craftsmanship.  She's quite articulate and funny, and her smack-downs are more than justified.  So, without further ado, here's a passage she found in Lora Leigh's Dangerous Games:

How long had it been since he'd cried?
He needed to cry now, to ease the emotion tightening his chest.
As Clint eased the plug from Morganna's rear, he could feel the emotion ripping through him, tearing at his soul. 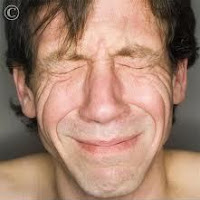 How's that for angst? The act of yanking a plug out of someone's butt was enough to choke this hero with soul-shredding emotion.  Holy hot damn, enemas must give him a complete nervous breakdown!

Got any favorites to share? I had to stop looking 'cause it's getting late.
Posted by K. Z. Snow at 1:30 PM 2 comments:

So, I started writing a Christmas tale, "Rituals," but I'm finding it difficult to proceed. Not only am I not in the holiday spirit, but I'm one of those writers who can't juggle projects, at least not when they're in the composition stage. You see, I was in the midst of A Hole in God's Pocket when I started "Rituals." AHiGP had me challenged and preoccupied enough. To complicate matters further, yet another idea has come a-knockin'. Now I'm stymied and can't seem to focus on any of them. When I try, one of the other two WIPs starts nagging, Hey! Come back here! You're not finished with me yet!

I hate when this happens.

Anyway, Jackson and Adin have slowly but surely been resurfacing. I have in mind a kind of serial story -- or rather a series of three interlinked novellas titled Scourge: Black and Scourge: Red and Scourge: White. They would feature a mysterious child (or is he?) named Carny Jessup and a powerful but ruthless Moroccan wizard named Zod whom Jackson met when he was still learning his art. The stories will be anything but light and bright. There's a reason for that. Jackson has never faced a truly worthy opponent; since he needs to pump up his magickal muscles, he could use one right about now. And Adin? Well, he has the kind of past that's not likely to leave him alone for long.

AACK! What to do?

Utopia-X rises from the e-book ashes. 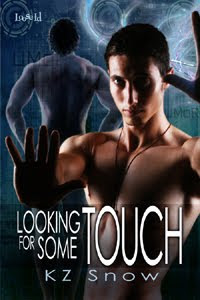 Holy jamoly!  Google just alerted me to a post at Tracy's Place regarding my Utopia-X books.  (Hi, Tracy, and thank you! *waves like a fool while throwing kisses*) This is a case of synchronicity if ever I saw one, because I've recently been thinking a lot about these stories.

Utopia-X, published by Loose Id, is a four-volume, futuristic urban fantasy series. And, yes, it's m/m. The world, which centers on a city-state called Regenerie, is populated by humans, angel-demon-human hybrids, urbane vampires, good and evil elves, underground magicians, and various and sundry other creatures including a golem, a demi-gnome, an "endotronic parasapient" known as the Groan Witch, and a terrifying mutant called a Spinner.

Believe it or not, the series is full of sex and romance.

One of the songs that makes a zombie want to weep . . .

You'll have to read about Dustin and Remy to know why, but you can find the scene in which this song is playing in the Prologue to Abercrombie Zombie.

"Author, be careful what you wish for when it comes to your backlist."

Early on in our careers, we scribblers are led to believe the following: One of the benefits of achieving some modicum of notice in the bookworld is that readers, if they like what we're writing now, will ferret out the fiction we've written in the past.  Sounds good, eh?

Problem is, we're not always terribly proud of what we've written in the past.  Maybe it's kind of rough around the edges. Maybe it reflects a mindset we've long since discarded, a mindset that isn't reflective of what we're currently producing. Maybe our older material just sucks sewer water through a straw packed with flesh-eating insects.

Don't think I'm not grateful for their interest. I'm VERY grateful. But I'm also embarrassed. I don't want their impressions of the old stuff coloring their impressions of the new stuff. A couple of my erstwhile publishers wanted lots o' sex in their stories. And, readers seemed to favor certain tropes and subgenres back then. And . . . hell, I confess I went through a phase where I thought it was more important to write to be read than to write to be true (to myself, that is).

I have some oldies floating around that I'm not too ashamed of. I think Plagued, for example (which introduces Adin Swift to the world and Jackson Spey as his friend), is a damned good vampire yarn. Cemetery Dancer isn't terribly bad, but it would've been better without the head-hopping and the extra and detailed sex scenes I was "asked" to insert. There are a few others.

By and large, though, my m/m fiction is far superior to my m/f fiction, much of which feels like a none-too-appealing backside. Oy.
Posted by K. Z. Snow at 9:17 PM 18 comments: