Go out and celebrate!

Now that Merman is at the galley stage, I can start posting snippets. (The entire first chapter will, of course, be available at the Dreamspinner site once the book is on their Coming Soon page.) The blurb is posted in the previous entry.

Troubled and restless when he left Taintwell, Marrowbone spent the predawn hours walking a deserted stretch of beach south of Purinton. He kept telling himself to move on, get away from here, travel farther inland, perhaps to Widger or Nittyville. He’d got the information he’d been after: Simon was doing well. Although Perfidor had encouraged him to stay in Taintwell for a while, Marrowbone knew that lingering in this area wouldn’t be wise—for a number of reasons.
Fan’s parting words continued to echo in his mind. “It pained him, you know, that you left so abruptly. He didn’t regain even a semblance of his old bluster for at least three months. William is certain he misses you still.” Marrowbone had tried to dismiss these claims, blaming them on Will’s sentimentality and citing Simon’s resilience. “Nonsense,” he’d said. “I’ll wager Mr. Bentcross has enjoyed himself with half the denizens of Skipskin Mews, male and female.” Fan, watching his friend insightfully, had replied, “Some, perhaps. But I’ll wager he hasn’t given a penny’s rim about any of them. Would you like to know why I think that, Clancy?”
Marrowbone had demurred and instead said his good-byes.
Stopping now, he stared out to sea. He hadn’t seen it in daylight for countless years, but he remembered Simon once saying, “I loved to swim when I was a boy in Kings Province. But here, the ocean is the color of sickness.”
The ragged, grim hump of Floating Brick Island broke the line of the horizon like a reading on a sluggish seismometer. Far off to Marrowbone’s left, the carnival known as the Marvelous Mechanical Circus, shut down for the night, was a mass of shadows pocked here and there with dull light. The distant snap of windblown pennants occasionally broke the steady susurration of waves meeting shore.
Although Purinton was at Marrowbone’s back, it made its looming presence known. He could smell its breath, a creeping stink of smoke and oil and tar, dust and dirt, overcooked food and the end result of its consumption. He could hear the relentless, thumping thunder of its voice, diminished though it was by distance and night. Most people would only catch traces of odor or hear a faint cloud of noise, but a vampire wasn’t like most people. So Marrowbone, if he concentrated, could tell that horses still clopped and streetcars still clattered and 24-hour mills and manufactories kept up their busy clangor.
A bit inland, between sea and city, an aeropod flew over the train tracks. It seemed to be leading the locomotive that chugged rhythmically in its wake.
Briefly, Marrowbone watched them over his shoulder. Beating rotors thrashed against the inky sky. On the ground, a line of black cars heaped with coal crawled along like monitor beetles on a march. Between the aeropod and the train, roiling steam and billowing smoke mingled, filling the air.
His only thought was, It’s truly stupid of me to be out here.
Marrowbone knew he could readily be identified for what he was and even who he was. No mortal glided over the littered sand, as if each grain were a tiny ball bearing. Few mortals resembled errant slips of moonlight. Not even another of his kind had hair that floated and rippled when the wind caught it, a bleached silk banner torn into gossamer threads.
The briny breeze had felt so refreshing when Marrowbone landed on the beach, he’d chucked his hat into the sea. Now he regretted his impulsiveness. Wherever he went next, he’d have to pinch another hat as quickly as possible.
Being obvious did not work to a vampire’s advantage. Only in Taintwell did Marrowbone feel completely safe.
With that in mind, and in spite of being alone on the beach, he retreated to a low dune and sat. He’d be less visible if he weren’t standing.
Yes, he might’ve been lionized in Taintwell—he’d put an end to the practice of branding Mongrels, saved Fanule Perfidor from an assassin’s bullet, and been a significant factor in stopping persecution of Taintwellians—but everywhere else he was feared and despised. Purinton’s government, in spite of its overhaul, still reeked of corruption and bigotry, by all reports. And its Enforcement Agency now had a Special Threats Unit dedicated to seeking out “unusual enemies of the people.” Were a team from that unit to come upon the infamous vampire Clancy Marrowbone, they’d be well-prepared. He’d never survive a confrontation.
Resting his forearms on his upraised knees, he stared past the advancing lines of foam to Floating Brick Island. What kind of research, he wondered, would benefit from Simon’s “Bubble”? Or was the project more a salvage than an academic operation? Would Simon be safe inside his sphere?
“Stop,” Marrowbone whispered to himself. He couldn’t become too caught up in this. Curiosity, interest, fascination—and certainly concern—acted as adhesives. He’d intended to peel himself away from the province of Purin as quickly as possible.
Laden with flotsam, the low waves sloshed rather than broke on shore. Marrowbone had been paying them little mind. Now, though, with no aeropod chopping overhead and no train lumbering down the nearby tracks, he heard a different sound interrupt the water’s lulling, repetitive lapping. His brow furrowed as he tilted his head and listened more pointedly.
Raspy, that sound, as if a piece of wood were being scraped across the sand. An unusual filament of odor accompanied the noise. Marrowbone couldn’t identify it.
Much of the seacoast was redolent of marine as well as human waste. One not only grew accustomed to the stench but became familiar with it. Although this smell didn’t seem out of place the way a floral fragrance would, Marrowbone found it strange.
Following his senses, he rose to investigate.
“Ghosts alive,” he whispered in horror as he approached a shallow gully between a pair of dunes.
Posted by K. Z. Snow at 10:12 AM 4 comments:

The sequel to my fantasy-steampunk novel Mongrel.

When vampire Clancy Marrowbone returns to Purin province 22 months after his departure, he intends only to visit briefly with his Branded Mongrel friend Fanule Perfidor in the village of Taintwell. He also intends to avoid his former lover, the unfortunately mortal Simon Bentcross. What would be the point of rekindling their affair? Marrowbone merely wants to know how Simon is faring.

Quite well, it turns out. Bentcross, who now owns a machinery repair shop, has designed a submersible vessel for underwater exploration. He’ll be manning his “Bubble” for a marine research expedition shrouded in secrecy.

Vaguely troubled after his visit with Perfidor, the restless vampire stops at a deserted stretch of beach in Purinton, the provincial capital. He needs time to reflect before he moves on. But two unexpected turns, including a startling discovery, substantially alter his plans.

By the following evening, Marrowbone realizes his visit to the province won’t be so short after all . . . especially when Simon Bentcross reenters his life. In addition to their conflicted passion, Simon’s involvement in the mysterious Tower Hole project and Clancy’s involvement with a mysterious mutant lead to a growing host of complications and dangers. As if their affair weren’t star-crossed enough, both vampire and mortal become hunted men -- in Purinton, Taintwell, and beyond. 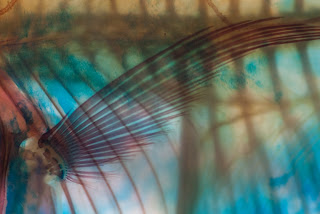