Welcome to another edition of Marie Sexton's SATURDAY SNARK! (Click on that link to see Marie's snarky snippet as well as those of other m/m authors.)

My contribution this week comes from my Loose Id novel, Mobry's Dick (available in ebook as well as print). In the passage below, Cameron Waters (MC #1) is in bed with a trick named Doug. Somebody's been making Cam feel mighty good. Thing is, Doug's fast asleep. Much to Cameron's surprise, and embarrassment, a third man has sneaked into bed with them. It's Cam's temporary boarder, Paul Patrillo (MC #2), a man on the mend from some injuries. 'Fraid I can't tell you how he sustained them. ;-)

This is more an excerpt than a snippet; it's kind of the Energizer Bunny of snark.

“What the…?” It was Doug’s voice again, carrying confusion and annoyance.

Light flared from the nightstand lamp on Cam’s side of the bed. He blinked against it as he boosted himself onto his elbows and tried to focus on Doug’s muscular bulk. Doug wasn’t looking at him. Doug was looking past him.

He clumsily flipped onto his back and scooted toward the headboard.

Naked, Paul stood over the bed, his incipient boner shrinking.

“Who are you?” Doug asked. A logical question.

“The invalid who’s been locked in the spare room.”

Doug shot Cam a befuddled glance before focusing on Paul once more. “You don’t look like no invalid.” His bleary gaze fixed on Paul’s cock.

Reality swam away as Cam stared at Paul. His houseguest had been doing this and not his pick-up? He blinked, even more stunned than poor, blindsided Doug, and tried to shed the feeling he was precious to the man who’d been exploring his body so intimately.

“That’s what I said,” Doug countered. “Why were you locked in another room?”

Cam finally found his voice as his haze of arousal, and shock, dissipated. “He wasn’t locked in any damned room. He was just downstairs, asleep. Or so I thought.”

Paul coolly regarded him. “Where’d you find the bear?”

Cam clamped his hands to his head. “What the hell are you doing in here?”

“I thought that was fairly obvious.”

“You didn’t tell me you had a boyfriend,” Doug said to Cam. He sounded both irked and a little hurt.

“I don’t have a boyfriend. For shit’s sake, I just came out—”

“Three weeks ago,” Paul said, looking at his wrist as if it bore a watch.

“Then who the fuck is he?” Doug was clearly flustered. As if underscoring his frustration, he farted—an oddly high-pitched sound for so beefy a man. Its thin squeal seemed to burrow into the mattress.

Paul frowned at him. “Did you just—”

“Get out of here!” Cam scrambled off the bed. As he guided Paul toward the door, he said over his shoulder, “He’s Paul Patrillo, a temporary housemate. Don’t worry about it. Go back to sleep.”

“I think Cameron’s already met his group-sex quota for the week.”

“Will you please shut the hell up?” Cam hissed into Paul’s ear.

Paul tried to step past him and head for the nightstand. “Just let me grab my lube and condoms, would you? Remember, I don’t have a sugar daddy to pay for this stuff anymore.”

Cam blocked him. “Later.” He managed to guide Paul onto the landing outside the bedroom. “What the hell were you trying to do?”

“Repay you.” A shaft of moonlight slicing through an octagon window made Paul a shadow with features. A tall and handsome shadow that smelled of male heat and clean linen and herbal shampoo.

“For what?” Cam eased the bedroom door closed at his back.

Paul’s eyes gleamed as he rolled them upward. “For putting me up. You invited me to stay here when I got out of the hospital. Remember? You’ve been taking care of me. Remember?”

Repay you. Hardly an act of adoration. Hell, it barely qualified as intimate, regardless of where Paul’s mouth had been. “Don’t get smart,” Cam muttered.

How could he forget taking care of this guy and keeping him entertained for the past three weeks? Watching movies and playing Scrabble with him. Cooking for him. Taking him to doctor appointments and driving nearly thirty-six miles every other day to pick up his mail. Helping bathe him—a unique agony because, even blotched with bruises the color of old, boiled egg yolks, Paul had an irresistible body.

Paul reached forward and cupped it, as if he’d sensed the reaction. “Hey, how was I supposed to know that after three weeks out, you’d start turning into a slut?”

“The bear didn’t peel your bud, did he?”

“Muscle man in there. It doesn’t seem he fucked you—thank God. That would’ve been an unpleasant surprise.”

Paul felt Cam’s pubic hair. “Sure as shit. Feels like somebody wiped his shoes on your welcome mat. What a waste.”
Posted by K. Z. Snow at 12:06 PM 5 comments:

Well, the way things are going in the m/m romance genre, it looks like writers who take their time writing, and don't self-publish, will be lucky to put out one story a year. And that goes for shorter works as well as novels.

My 45k-word contemporary novella, A Hole in God's Pocket, has been contracted by Dreamspinner and is scheduled for release in the spring of 2012.

My current WIP, the latest addition to the Jackson Spey / Adin Swift saga, will either be a three-part novel or a mini-serial of three novellas. If I go the latter route, my vision is to have the three installments released in fairly rapid succession -- say, a month or two apart -- because I know how frustrating it is for readers to deal with cliffhangers.

The business is changing, that's for sure. Authors will have to place (or produce) their work accordingly.
Posted by K. Z. Snow at 10:34 AM 7 comments:

So . . . this is Marie Sexton's idea. And a fun one. Authors post snarky snippets from their stories. Here's my first contribution, from Abercrombie Zombie, when the desperate Dustin DeWind meets the wizard he hopes will help him:

“Please let me talk to you,” the zombie said hurriedly, before the door was slammed in his face. “I have nowhere else to turn. My name is—”

“I know who you are. Word travels.” The man’s deep voice was both coarse and soft, like sand-scoured velvet. He eyed his visitor from head to foot. “You look like shit. But I suppose being dead will do that to a person.”

Click on the link above (to Marie's blog) to read more snarkalicious samples!
Posted by K. Z. Snow at 12:21 AM 2 comments:

Spread the Love on Spirit Day 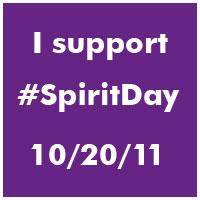 Be sure to wear purple on Thursday, October 20
to show your support for GLBT youth
and to decry bullying.
(Hey, every little bit helps.)
Posted by K. Z. Snow at 4:15 PM No comments:

Sins Against My Eyes

So, I've been entertaining myself this weekend by trying to find pix of Gay Rom Lit (you guys suck at posting, except Marie and Heidi) and checking out some online scavenger hunts, because I'm not beyond trying to win an e-reader which are sometimes good for finding new reads. I just can't face writing at the moment.

But . . . people, PEOPLE, when are you going to learn? Gaaaaaaah!

Cleanliness is next to godliness. It's true. Haven't you ever felt divine right after taking a shower? With Ashton Kutcher a delicately scented, hand-milled soap, a big ol' loofah, and salon shampoo? Well, there you go. Keep your blogs and websites clean. And I don't mean make them sparkle. No no no. Just tell your web designers they needn't expend their lifetime allotment of creativity and cleverness on your site. All they need do is make it fast-loading, readable, well organized, and easily navigated. Leave Teh Awesome to the kids on MySpace.

I and many other people would appreciate it.
Posted by K. Z. Snow at 8:18 PM 4 comments:

Something I have to do.

I know everybody's either in New Orleans or reading Divide and Conquer (or both), but I still feel obligated to post this reminder:


I have
a book coming out
on Friday.
Thank you.


(Now on to our regularly scheduled blogging.) 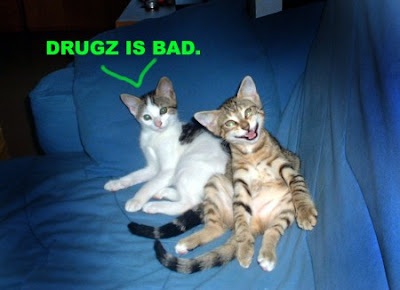 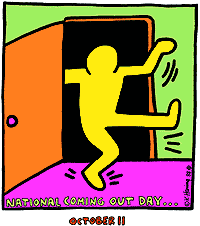 Perhaps one of the most important things writers of gay fiction and m/m romance can do (especially authors of YA books) is provide encouragement and hope -- at least a glimmer of hope, 'cause we sure ain't gods -- to people who must deal with the experience of coming out. This theme figures heavily in my upcoming release, The Zero Knot, as well as many of my other books. In fact, scores of authors have tackled the subject.

I don't know if fiction writers can make a difference (hence the "perhaps" in the previous paragraph) in terms of personal and social acceptance. I sure as hell hope so. The fact that non-heterosexuality is any kind of issue is absurd to begin with, but as long as ignorant people keep making others' lives miserable, all proponents of queer pride have to contribute whatever they can.

Let's all hope and pray that someday this issue becomes a non-issue, and all the fussing can stop.
Posted by K. Z. Snow at 10:02 AM 2 comments: 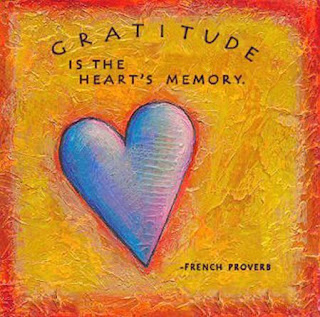 Mary Calmes gave me this. (Scroll down along the left sidebar. That lady is incredibly supportive and one of the nicest people you'd ever want to meet.)

And Chris gave me this. (She's generously given me, and others, many such things.)

And Kris gave me this. (I'm enjoying my pressie immensely!)

My dog Luna gave me red-quilted poop (she actually ate part her bear to do that, the selfless little thing), my dog Cody gives me many loving looks and big albeit rank smiles, the neighbors across the street gave me ginormous red hibiscus to ogle throughout August and September, and Nature has given me an Indian Summer full of glorious color.

I found a character lookalike!

This doesn't happen very often. I came upon a photo of actor Chace Crawford and stopped dead in my tracks. Oh-em-gee, I thought, that's Jess Bonner! Jesse Bonner is the main POV character in The Zero Knot. Although the actor is older than his fictional counterpart (and has slightly different coloration), his resemblance to my mental image of Jess is uncanny. 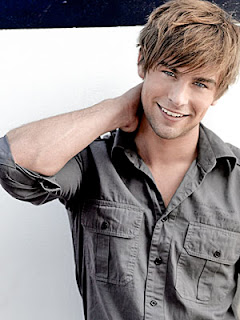 Rumors, and denials, abound when it comes to Chace Crawford's orientation. But whether he's gay, straight, in between, or undecided, it was damned ballsy of him to participate in the photo shoot below, so he's okay by me. 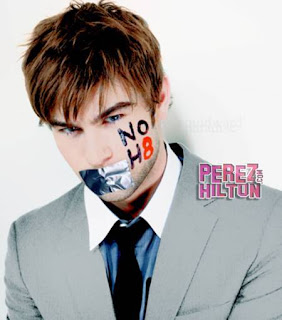