An Award for Making Stuff Up - WINNER 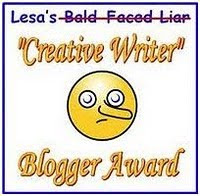 Jessica Freely (click title) sent me this, obviously in recognition of my penchant for "making shit up." :-D
That minx was at Wiscon, and I didn't even know it! (Wiscon is essentially a female fantasy writers convention, GLBT more than welcome.) And she did a reading there! And it's only a two-hour drive south of me! *sigh* Well, there's always next year.
Anyway, y'all have played this game, I think, so I can't tag anybody. Just call me K.Z. "Day Late and Dollar Short" Snow. I'm always behind the times.
As you likely know by now, I've been an animal lover all my life. So, if you're good 'n' bored at the moment, try to guess which ONE of the following statements is FALSE.
1. I once had a labrador named Black Dog.
2. I once had a goldfish named Fluffy.
3. I once had a cat named Calvin.
4. I once had a goat named Annabelle.
5. I once had a cockatiel named Gilbird.
6. I once had a rooster named Boss Tweed.
7. I once had a hamster named Queequeg.
(Okay, it was only supposed to be five, but I've had a lot of freakin' pets.) And what do you get if you win?
A sock puppet -- the kind you don't mind encountering on blogs and loops! You must pick him up, though. This is the kind of package that doesn't ship well. *G*
Well, since it appears most everybody is either on vacation or doesn't like me anymore (fickle lot), I'll just go ahead and congratulate * CHRIS * for guessing that I never named a goldfish Fluffy. I've had fish aplenty, but I've never named them. They don't seem to live too long. :'/
Tube Socks is now hitchhiking his way to Minneapolis. Pray for the man; I don't believe he's wearing any shoes. 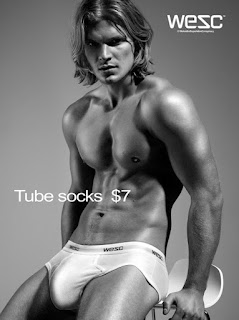 I'm guessing the cat is the lie because it actually seems like you WOULD have a cat named Calvin and since that seems the most logical it is therefore by the process elimination NOT logical at all and thus false.

Did my rationale make sense?

I'm going with the hamster as the lie. Just cause I think Queequeg is a hard name to say frequently which if he was a pet you'd be doing. Course could be that you like hard things and therefore that was a name you liked to say a lot. Hmm, still going for the hamster.

Tam, in answer to your final question: Uh...no.

You made sense, Lily. But whether or not you were right is another story. ;-)