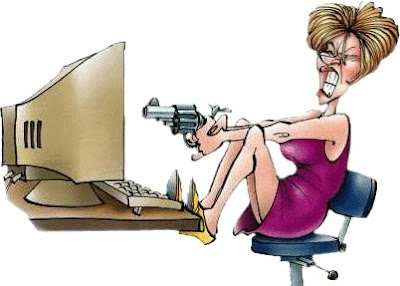 Warning: This post exhibits an exuberant indulgence in profanity.
Yup, it's been another one of those weeks.
My Local Expert Computer Repairman, after wiping every bit of software from my hard drive (thus losing MS Office Suite 2003, which I couldn't reinstall for reasons I won't get into), replaced it with a Thinstall, now Thinapp, version of 2007. I was dubious, but it worked fine. For a while. When it wasn't being attacked from within by the trojans that had lodged there.
Then, last week, I tried opening Word and only managed to open an error message: "Microsoft Office Word has encountered a problem and needs to close." The same message came up for every program in the suite. It won't go away.
I did the most logical thing to do -- after, of course, pitching hissy fits from here to Kuala Lumpur -- and called the LECR. No answer, so left a message. Got no return call. Worked, in the meantime, in Wordpad. (Oh, joy! No page view! Next-to-no formatting!) By the time I got through to the LECR, I was like a Rock 'Em Sock 'Em Robot with an ADHD kid at the controls. As soon as I heard his voice on the phone, I was ready to let the verbal fists fly, which would have brought me some measure of relief.
Just as my mouth opened, he said, "Oh yes, I got your message. But I just got back from the MAYO FUCKING CLINIC TO HAVE MY PACEMAKER REPLACED AND HALF MY CIRCULATORY SYSTEM REAMED OUT!" [Insert Ritalin into open mouth.] Gah! Thus began another round of calls made and not returned and appointments broken. But there hasn't been a damned way for me to vent about it because the mofo and his bum ticker just got back from the fucking Mayo fucking Clinic!
As of now, I'm supposed to deliver the machine to him on Sunday morning. The way my luck's been going, he'll be dead by then.
Which brings us to the printer/scanner/copier piece of shit from Dell. Ah, Dell. The most international of American companies, with customer service based in India, hardware made in China, ink cartridges from Mexico, and nothing in the U.S. of A. except maybe an executive urinal or eighty. I've already had to replace this crap pile A920 while it was still under warranty, because it just . . . gave up.
Well, after the LECR wiped clean my hard drive, I had to reinstall the printer software. But guess what? The brainiacs at Dell, who are obviously rejects from Microsoft, who are obviously rejects from the LECR's basement repair shop, designed this monument to technological advancement so that when you have to reinstall it, the scanner and copier stop working! WTF? I discovered online that this is a fairly common problem with an incredibly complicated solution that isn't even a sure thing. I repeat, WTF?
Which brings me to the new contract that I now cannot scan and send back to the publisher. But I'm too exhausted to tell you about it. So . . . next time.
Posted by K. Z. Snow at 10:36 PM

Ack! And what the hell?! He still hasn't gotten things cleaned up?!? O.o

Thank you, Chris. My thoughts obviously haven't been so happy.

Shit. There's nothing worse than someone who takes the wind out of your self-righteous attempt at a rant by having a damn good excuse.

Mojo that it SOMEHOW gets fixed.

Computer problems are so incredibly frustrating and I'm so sorry it's happening again. I agree with Tam's suggestion. Maybe a longer drive to another repair center might be in order.

I do appreciate the sympathy.

Sad to say, making two round trips to a big city (which, in my case, would be Madison) isn't really an option, either. My car isn't in the best shape. And I can't bring myself to impose on anybody to haul me around, because my friends are busy with their own jobs and families.

Just gotta pray LECR can figure out what to do. He seems to think he can.