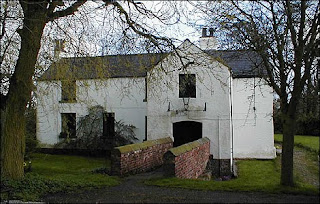 My former mother-in-law was from Blackpool (England England) and had many family members in that part of the world. When my ex-husband and I went to Britain for a three-week visit (this was, of course, before I killed him), one of the places we stopped was Chingle Hall, on the grounds of which a really delightful dog show was going on.
Mind you, I don't have a psychic bone in my body. I've been in plenty of cemeteries, even on Halloween, and have lived in old houses. But as I toured this 13th-century cruciform structure, I distinctly sensed . . . something. Unsettled presences, I guess. The feeling was strong and tenacious, although not particularly distressing. We'd already, by this point, spent a couple of weeks doing touristy things in London and Bath, the Cotswolds and Lake District and Yorkshire, but no place, not even the Tower, had affected me the way Chingle Hall affected me.
Eerie building, that. Click on the post title to read more about its history.
Some years later, when I was on Husband #2, I lived just north of Sturgeon Bay on Wisconsin's Door peninsula. Behind our home, down a dirt access road, lay an abandoned 40-acre cherry and apple orchard, all its structures somewhat decrepit but still standing. I had no problem poking around the outbuildings. But as soon as I entered the house, I wanted very much to leave.
I knew nothing about the orchard's history, and there was nothing foreboding about the look of the residence. It was just a weathered clapboard farmhouse. Still, its atmosphere, even on a sunny summer day, was heavily oppressive -- so much so that I had to get out of there. Whenever I mentioned my reaction to other locals familiar with the property, they knew immediately what I meant. A chill between the shoulder blades, hair standing up at the back of the neck, an urgent desire to flee. It was worse than a reaction to a run-of-the-mill creepy place; it was more like a reaction to an evil place.
I haven't had any experiences like these in a while. What about you?
Posted by K. Z. Snow at 11:44 AM

I lived on a haunted property. Almost everyone who lived there had an experience, many of the same kind.

I had a little 18 ft. trailer on the property out by the wet land part of it.

One day I was napping and I felt my bed moving. It felt like someone was jumping around my body. I woke up and of course, thought it was a dream. So I went back to sleep. Again, something jumping around my body woke me up. But this time, I saw the bed covers being indented. I ran out of there so fast, it wasn't funny.

Other times I'd be watching TV and I'd feel something brush my shoulder. It didn't feel like a nasty entity, but more mischievous.

At that time, I had been going back and forth to Japan for visits and there was a psychic on TV who spoke to dead people. She's famous over there. Well, I managed to find her book in English and she said that spirits stuck on the earth plane just want to be acknowledged. And to offer them some gift. (that's a total Buddhist thing by the way) and so I did.

I put a glass of water and a piece of choco by my bed and told the spirit that I know it's there but leave me alone. After that nothing happened.

However, when I told the people who owned the property what had happened, they said that the property was a former boys school and that two boys had been locked up in boxes for punishment but escaped to the wet lands and trying to get away, drowned.

I've had other experiences, like I've been pulled to certain rooms in older houses not being able to walk away only to find out someone had died there.

One lady I took care of, her husband had died a few years earlier and every once in a while, I'd smell his pipe smoke, or the light would just turn on in the hall. One we never used and needed to click tight to turn on or off...
His ashes were in the bathroom in the master bedroom where I slept.

Wow, you're much more receptive than I am! Then again, maybe entities try getting through to me, but I'm just too dense to notice. (I automatically ascribe unusual occurrences to natural causes and never give them much thought. That must be pretty discouraging to any spirit attempting to communicate. Crap, now I feel guilty about it.)

I can't think of anything in my experience that might be similar. Such a boring life I lead. *sniff*

Actually, I don't need those kinds of adrenaline rushes. Being creeped out by stuff you know is make-believe is one thing, but when you're not sure what the hell is going on... *shiver*

I'm not sure those experiences are real, but act like they are just in case it's an incubus... or succubus wannna eat me or... do something else. 0_0 snort

No, I can't say I have. Since I don't believe in the spirit world perhaps my senses just shut out any evidence. LOL Or I'm just oblivious which could well be the case.

I don't know what to make of it either, Tam. I'm sure a willingness (or eagerness) to believe does play a huge role in many reports of paranormal events. Then again, the earthbound senses of more pragmatic people might be missing out on a whole lot of mystery.